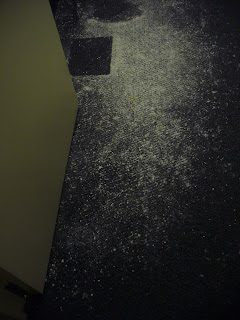 Apparently I miscounted my pictures when I did the eleven picture update. I only did ten. Whoops!

So to make up for it, I've got a nice little "bonus" picture (that isn't really a bonus, since I missed it anyway). This picture shows what I came home to nearly every day. The popcorn-material on the ceiling is falling off enough to where it looked like Charlie Sheen had been in my room. Then again, there weren't any prostitutes in my room, so I suppose not.

I've sent in two maintenance requests - one on the 5th, the other earlier today around 4. Hopefully they'll actually do something about it this time, or at least let me know. If not, then these pictures might find their way to someone's email inbox. It's been like this since the first week of school, so it would be nice to get something done.

today's bonus video is about something political that hasn't been covered much by the news...
submitted for your eyeballs by Wes at 1:54 AM

Email ThisBlogThis!Share to TwitterShare to FacebookShare to Pinterest
Includes: ಠ_ಠ