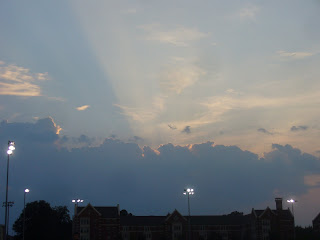 I owe you a day, gimme a break!

Background: When you've got literally no time in the day, then this is about the only picture you're able to get. I'll probably get a picture of my new room at some point, but bear with me. This weekend is planning to be a long one.

The band is mostly done with the Prelude - just gotta get it cleaned and whatnot. Then there's also the Pit playing the crazy runs in it. There's also some of the second song that we've done, that we're playing tomorrow at the stadium for parents and the like. Since that's in the afternoon, it's going to be pretty danged hot standing out there in the sun. We'll see how that all goes. The Pit has the music for the three movements. We've gone through the first one, need to work on the second one more, and will start looking at the second one soon. We also have Starlight and Pumped Up Kicks for pre-pregame stuff. So far it's sounding really good, and it's good, college level music. I'm happy, to say the least.

today's video is an entirely different kind of flying, altogether...

submitted for your eyeballs by Wes at 1:31 AM