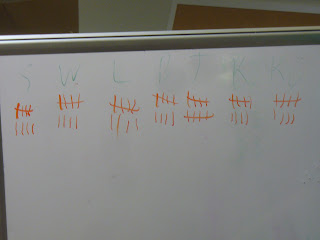 I miscounted and now have four pictures for three days. Whoopsies.

Well, here first is the scoreboard for Munchkin last night (Sunday night). Everybody got to leve nine one way or another, and we fought it out from there. Eventually S. Jr. was able to pull through, holding off his best cards until he was sure he could pull it off. That jerk! It was a lot of fun anyway, and it had been way too long since I had played Munchkin. Earlier there was also some lasagna made by some awesome people. It was delicious - enough to make a trip back to get seconds. 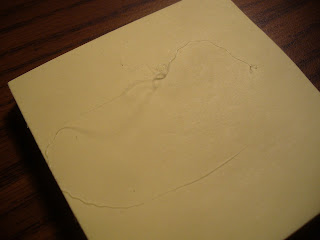 Next is a a little token of appreciation that one of the pit RATs gave me! It was just a little thread off of her shirt that she pulled off, but she told me to keep it when she went off to grab stuff from the band building. Me being me, I stuffed it into a side pocket and kept it. She was rather surprised that I did, apparently, and was happy.

It's now sitting in a safe box in my room somewhere. I really don't know why I want to keep it there. Don't judge me. 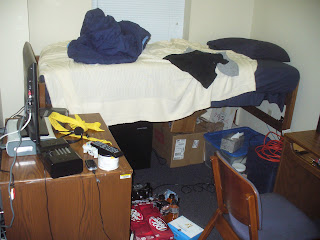 Last is my apartment room! It's mostly organized. The stuff under the bed is the fridge plus boxes left over from moving in. Don't tell my parents, but one of them might get used for HvZ instead of moving back home...Speaking of HvZ, my two bandanas are sitting right in front of the TV there. My gaming systems and music player are there too, and my phone is charging.

See the remote there? See what it's sitting on? It's a can. That can contains almonds. Natural, Whole, store-brand almonds. I didn't purchase them, and I wasn't planning to. The popcorn, the soda on the floor, the almonds? All bought by my mother for me. This is going to be a fun, but long, year.

submitted for your eyeballs by Wes at 10:15 PM