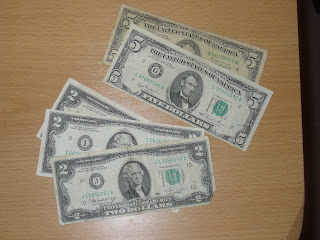 Whoo! So this covers yesterday and today.

First picture is MONEY! Cha-ching! Not just any ordinary money, but $2 bills and the old $5! If you really must know why I have these, well I've got this problem. Apparently I keep all the things that I think are strange, out of the ordinary, not seen every day, the list goes on. So I kept the three $2 bills I got, and I kept these $5 when I found them in circulation. Do you see any of them anymore? I didn't think so. I've also got $1 in drummer boy quarters, a franc, and a few other interesting coins that are uncommon in the USA. I'm a dork, alright? But this is just trying to show why it's taking ages to clean my room - there's so much junk that needs to be thrown out or stored. I really don't know how I got most of it in here. 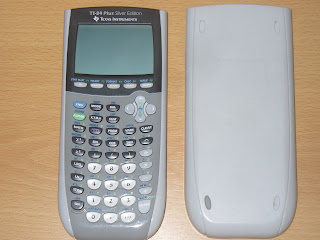 Next, if you want a graphing calculator, then I've got this one here for $80. I normally wouldn't try to sell anything here, but someone asked me for pictures of it so one thing led to another, and now this picture is up here. There's a story behind it, sort of. I already had one of these, but I lost it in my high school band's drum room. It stayed lost for about a week before I got a new one. Several months later, it shows up again in the band room. I knew it was mine from the programs that were in it. So I decided to put the newer nearly-brand-new one up for sale for a decent price.


Other than that, I mostly got over my cold today. I'm now hacking up the drainage, but I'm okay with that - mostly because I don't feel like sleeping all day like I did on Sunday. Though, staying up to 3am like I've just done probably isn't helping. So, goodnight.

submitted for your eyeballs by Wes at 3:01 AM