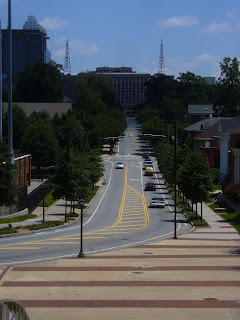 First, it's the view from Klaus, down Ferst street. Cars chugging along, just after lunchtime, etc. Some friends and I went out to Ray's for some "New York style pizza". I got most of the way through my calzone, so I call it a success. Percussion camp when really well this week/weekend, and we got a lot covered. Plus, the show music is insane - in an awesome way. Lots of fun stuff going on in it, including some fast paced marimba runs which are always a bunch of fun.

So yeah, I'm moved into my dorm. First day of full band camp was today, and it was mostly just a short little practicing packed with welcoming the RATs to Tech. There's gonna be some fun later in the week, too. We'll see how that turns out! 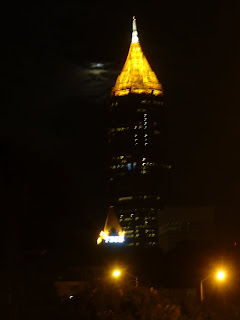 Right here is the view coming down...Tech Drive? Correct me if I'm wrong (and I know you will). The two of us getting dropped off after section dinners, along with our driver, got out to take some pictures of the moon behind the pencil building and Tech Tower. It looked really mysterious, creepy, serene, whatever you want to call it. It made me wish I had a tripod, that's for sure. After a new camera, that would be next on my list of photography equipment to buy.

I've still got lots to unpack, but of course I've already got my laptop, TV, Xbox, and bed set up. I'm just like that.


[meaning, a RAT adopted me as his Vet, and I'm happy]

submitted for your eyeballs by Wes at 11:56 PM