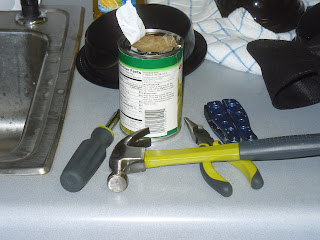 I'll owe you a Saturday picture, then.

First picture here is the most ghetto* way to open a can. Hammer and screwdriver to open a small hole in it, then the pliers to pull open the lid. No pain involved...thankfully. It was slightly annoying to scrape the food out of the can itself with a plastic fork, but everything turned out well in the end. That night I ate with my roommate from last year - and it was delicious. You'll probably not think the combination that we had was good, but forget that! It was good! Then we played video games for the next hour or so while my roommates drank and played games out in the room lobby. 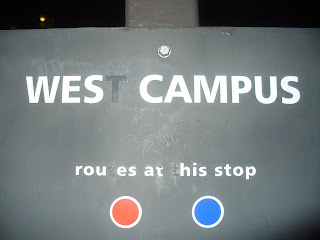 Next, it's my campus! That tradition that it not endorsed by the college has led to signs that read "WES CAMPUS". Therefore, since my name is Wes, I own half of campus! But yeah, not too much of note has happened. I went to a volleyball game that turned out really well. I saw a couple episodes of Dr. Who. There's not really much else to report on my end, hence the lack of interesting pictures.

today's video is about planking...


*i do not use this term lightly
submitted for your eyeballs by Wes at 2:11 AM