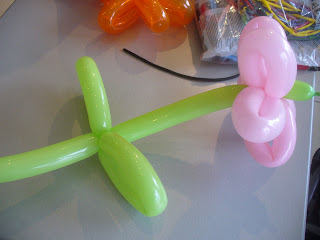 So first, I've got this little balloon flower. At a yogurt shop near where I work, it was their first birthday, so they gave out free yogurt for 1-1/2 hours. There was a friend's mom making these balloon animals and flowers and hearts, so I had to grab a picture of one. There was a little 8 month old boy next to us who didn't wake up after two different balloons popped. His parents even let him play with a small balloon dog for a bit - it was cute. 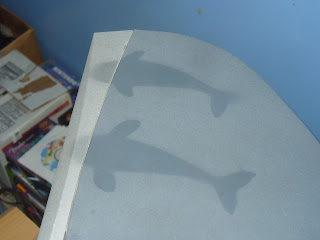 Next, here, I've got dusty outlines. There were small rubber animals - a dolphin and a whale - that were sitting on my old desktop monitor. I finally got all the junk off of my old computer moved to my laptop and moved the desktop and all its accessories and things to the back room. of course I dusted the monitor off first, but I had to grab a shot of this. I've had this computer for a long time. And there was so much junk on it. After moving many of the files, it was running a lot smoother than I remembered. I've still got Microsoft Office 2007 on it which takes up a lot of the RAM and C: drive, but that's just about the only thing that's even left on the computer. 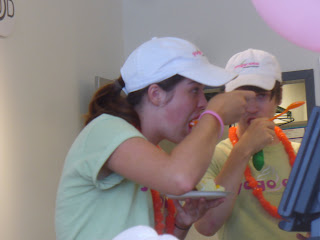 Lastly, there's this "omnomnom" face. She works at the yogurt place that was giving the free food. I also know her from high school. She looks like a panda, whether she agrees or not (and whether her sister agrees or not as well). I was pretty happy to hand off Pit section leadership to her and the other girl that does it. From what she told me, their section gets along really well. That makes me all warm and fuzzy inside.

Anyway, I've got to grab some medicine. It was a pleasure to get updated again. Also, I bought a new TV. Pictures to be posted of it later. Hurrah.

today's video is about salt...
submitted for your eyeballs by Wes at 5:44 PM