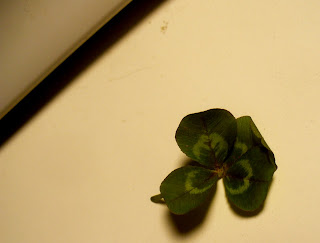 So I messed up on day numberings and thought I was too far ahead. It turns out I'm right on time. How quaint!

I took pictures outside with my mother's film camera. It's a Canon 750 for the camera-smart people out there.I don't know or remember anything about the lens, other than that it felt like a wide angle even though it wasn't labeled like one. It was nice going around with a non-digital camera for once!

As I walked around the front and back yards, I accidentally spotted a four leaf clover. I took some pictures of it near the end of the film roll, then discovered that I had completely failed at putting the film roll completely in when changing them. So I went out and took 24 more pictures, including ones of the clover that was placed where I found it in such a way that I hope it looks natural. We'll see.

This picture, however, was after all that. The fourth leaf looks a little shy, and the clover was curling up. I got out my lamp and, after a bulb change, took this picture. I'm not 100% pleased with it, and I wasn't pleased with using a digital point-and-shoot either. Oh well.

Merry Christmas, peeps. I hope you get what you need, even if its not what you want.
submitted for your eyeballs by Wes at 11:00 PM