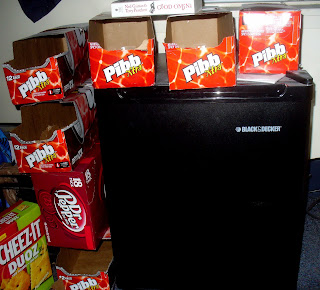 Weekends are pretty chill for me, it seems. At least, non-game weekends. I didn't have much to take a picture of at all. So here's the recycling in my room that needs to find a place! There's...six Pibb cases, five of which are empty, a large pack of Dr. Pepper, and the Cheez-it box.

The book on top isn't going anywhere, especially not the recycling bin. It's a comedy about the end of the world, and a good book. Then again, I enjoy just about everything I read, so take that with a grain of salt. If you enjoy Neil Gaiman and/or Terry Pratchett, then you should like it since they're the coauthors. 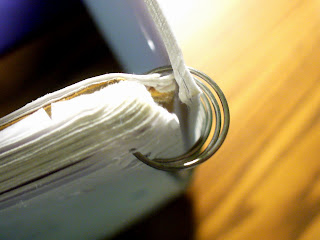 Next, I want you to guess which side of this notebook has been written on. Go on, guess.

I really enjoy writing down my thoughts before putting them on the computer. Why? I dunno. It's something to do while I sit in the Student Center, usually. On the left is everything from my main story (minus part of one chapter) as well as what is currently half of another story idea. That one hasn't been worked on in awhile, but I'm not too worried about it. I want to knock out this big one first before really working on the other.

In other news, I finished the narration of Ashley's Story. If you haven't checked it out, I think it's worth your time to watch them all.

I don't get why you kidnap people who say your name. It's really confusing! I mean, it's like, you're just sitting at home, telling ghost stories, when
submitted for your eyeballs by Wes at 12:22 AM