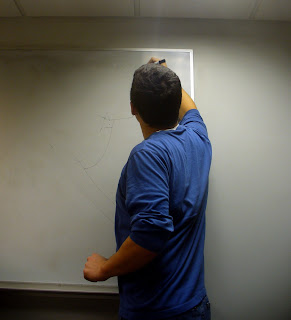 Background: DND was tonight! We raided a house of some bad people. Not all of them were bad, but their higher-ups were doing bad stuff. The house is now burnt to the ground thanks to someone in our group, even though most of us were planning on just leaving it to a stone room in the basement. Frustration ensues.

Earlier today I actually presented a final project with my group and got to rant on in the peer review about the fourth group member who did nothing (and didn't show up for the presentation). It was...enjoyable

I also watched a pretty depressing movie on HBO2 called Never Let Me Go. I was sort of raging at the characters and at the TV for what was going on. So sad. Bah!

That's all for today. I guess I have to write another letter. Fun fact: these things are the only times I ever complain about anything, if they're even complaints.

Why do you make my head dizzy? I do not appreciate this. I really enjoy playing you. I haven't picked up an Xbox game in a long time, and this is how I get treated? Maybe I should get some sort of motion sickness pills or something, because this has happened with one or two other games, as well as this huge, 360 theater about helicopters that I went to once. You're still an awesome game, even though I'm on my4th or 5th run through.

Thanks,
Wes
submitted for your eyeballs by Wes at 11:49 PM